ALOES went Örö!
One of the results of our residency at Örö. We made several audiovisual compositions based on the movement and sounds of birds, ants, the sea and more of the beautiful nature we found ourselves in during our month on Örö. A minisite with all the texts, sound, pictures and video is available here: http://aloesmusic.com/oro/.
More live ALOES footage!
We finally got around to properly editing the footage we got from our performance at the Lofoten Sound Art Symposium in September last year. Thanks to Ann Rosén for filming.
Art Fair Suomi Opening Performance Teaser
In anticipation of better documentation from our recent performances with ALOES, here's a short teaser, made with material recorded during our performance for the opening of Art Fair Suomi 2019.
ALOES @ Ääniaalto III
It's been a while since I've taken the time to post here. In the meantime a lot of projects, exhibitions and performances happened. Strings has been been updated and exhibited in the Tekniikan Museo in Helsinki, several new projects were finished and exhibited and some design and concept work was done. They should all be available on here soon. For now the most notable new development is my collaboration with Marloes van Son as ALOES. Marloes does performances with her self-built electronic devices, I started toying with some visuals for her performances. The collaboration evolved into a series of experiments to unify sound, composition and visuals into a whole.

This video is an edit from some of the documentation we got from our performance at Ääniaalto III.
Prototype for a self learning sequencer 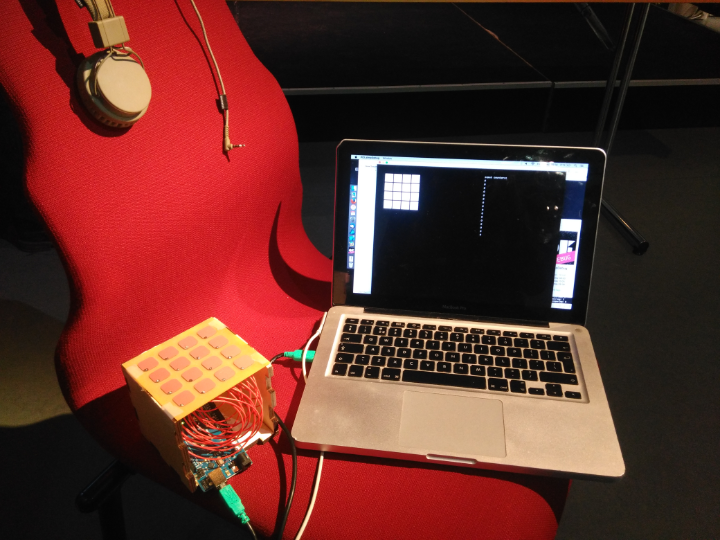 For the SOPI Physical Interaction Design course in december I developed a prototype device that is in the basis is a simple sequencer with a 4x4 setup of tactile pads. In its first state a single sound is mapped to each of the pads, the device registers and remembers all input to determine sequences played. If a sequence is recognised the device will start monitoring the popularity of that sequence and eventually replace the single sound of one of the triggers to that sequence based on the popularity of the trigger. This system keeps on replacing triggers and sounds, slowly pushing out creative and new options for a set of predetermined sequences, causing the system to resemble the current state of music: boring similar tunes with limited variation.
DASH'16 New Media Festival 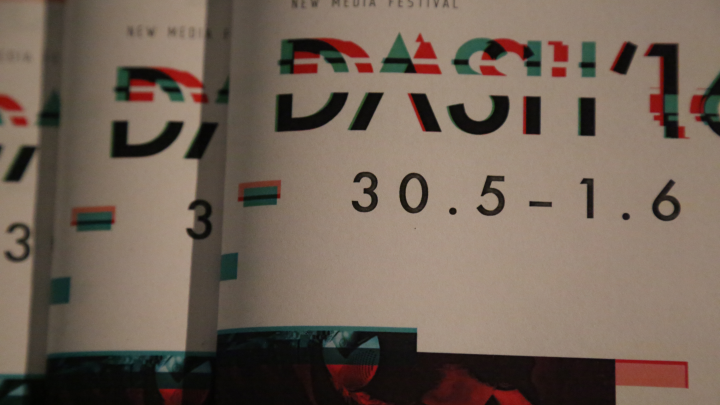 In May and June 2016 I organised the DASH'16 New Media festival in Helsinki together with two others and a bunch of help from even more people.

The festival hosted performances, talks and an exhibition over a period of three days. The exhibition showcased installations, prototypes and games, focusing on interaction, new technologies and virtual reality. In the evenings there were DJ and VJ gigs and live sound art performances. During the day there were talks by artists and researchers on topics relevant to the working field of New Media. More information and the names of all organisers, participants and volunteers can be found on the festival website: www.dashhelsinki.com/

A massive thank you to everyone who organised and helped out, especially Johanna Lehto, Camilo Sánchez Carranco, Mercedes Said and Elisa Spigai.
New Projects: 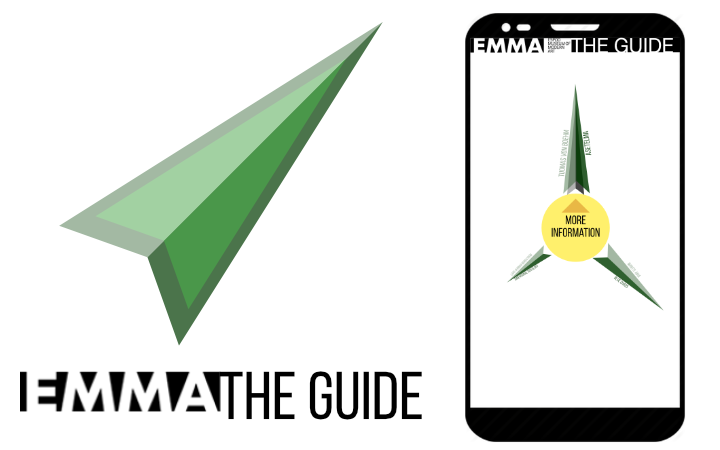 I made a concept for a web-based application for the EMMMA museum en Espoo
The concept tries to relate artworks to each other using only their meta-data, as the content is restricted by copyright. The relations calculated by the system will then give users a personally tailored museum experience by guiding them through the museum with a compass like interface. A full presentation PDF is available here
Twitter Reader for a new project 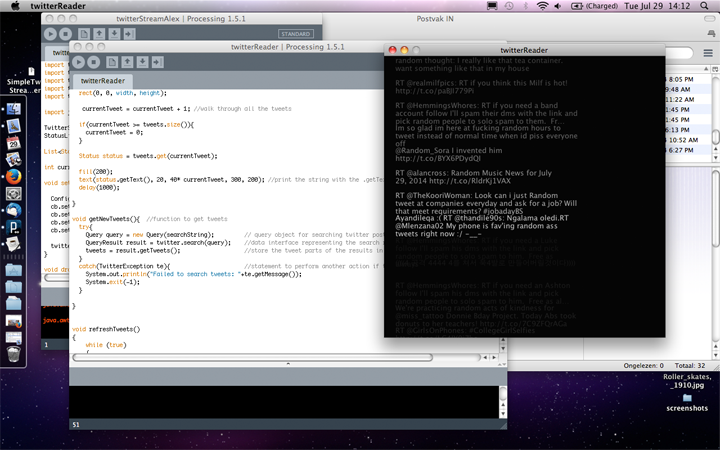 For a smaller project I'm doing in between I needed to stream twitter data, wasn't as easy as I hoped it would be, but it works now! Stay tuned for the project!
Current Project: 'Based on a conversation'

I'm currently working on a project together with Juan Beladrich (http://www.juanbeladrich.com/) about art, film and continuity. The project is a combination of a film by Juan and a system by me. The system will consist of a number of wires that can be connected by the visitor. The connections made will influence the sequence, speed and sound levels of the film. For the project I'm going to work with a Raspberry Pi and openFrameworks.
New website online!
It's been a while and the old site got... Kind of old. Since I'm back in business it was time for a new site. Enjoy it.